Recognition Robotics Mentioned in “Robotics+Vision at a Glance: The Dos, Don’ts and Applications”

The Googly-Eyed Robot
One company that’s “seeing” VGR in a whole new light is Recognition Robotics. This Ohio-based software developer distinguishes itself from other vision suppliers as a software recognition company.

“We don’t use traditional machine vision algorithms,” says Recognition Robotics Inc. (RRI) in Elyria, Ohio. “Our patented algorithms are based on the human cognitive ability to recognize objects.”

“In a machine vision world, the system is basically looking for geometric patterns and distances,” explains Cyrek. “But the human brain doesn’t process measurements. We do coordinated eye-hand movements based on what we recognize. Our recognition software basically works the same way.”

The software, called CortexRecognition®, is the brainchild of company Founder, President and CEO Dr. Simon Melikian. RRI takes its software and packages it with off-the-shelf hardware for a turnkey vision solution branded RobEye™, pronounced robe (short for robot) eye.

“The real groundbreaking and unique thing here is that with a single image from a 2D camera, we are telling the robot what the object is and where it is in space in 3D, or six degrees of freedom.”

Basically, RRI claims to be accomplishing 3D VGR with a 2D camera.

This video courtesy of RRI shows the system in action successfully aligning vehicle underbody components in a lab demo (note the googly eye). Even when the assembly components are relocated, the system adjusts the robot’s movements for proper alignment.

RRI’s lab demo was conducted using a vehicle underbody assembly provided by a major auto manufacturer. “Our customer already uses RobEye systems for part picking,” says Recognition Robotics. “This is the first application of the same system actually loading a part to the vehicle. We did the drill holes as a simple way to verify the parts lined up correctly and that the process was repeatable.”

“The idea is to use the RobEye system for multiple models without having to drastically change the end effector and add multiple cameras,” adds Recognition Robotics. “That’s a huge advantage for the customer.”

Recognition Robotics says RobEye is a “DIY (do-it-yourself) robot guidance solution” that works with any robot. 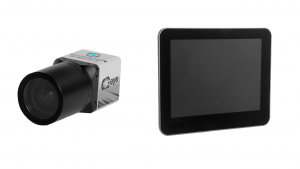