Recognition Robotics in “Intelligent Robots: A Feast for the Senses”

At Automate 2015 in March, another random picking solution was creating a lot of buzz. Dubbed Cortex Random Picking and developed by Recognition Robotics Inc. in Elyria, Ohio, the system retrieves randomly piled parts and stacks them one-by-one in a uniform orientation. It does this with an off-the-shelf camera by Baumer and without requiring calibration.

The reaction by booth visitors was one of partial disbelief and amazement, according to Recognition Robotics. “Nobody could believe that we can find objects in three dimensional space in six
degrees of freedom just based on an image or a picture of the object. Everybody wanted to know where the point cloud was, where the laser scanner was. There is none. There’s a camera taking a picture and we’re guiding the robot to find it.”

“And when we find the part, we’re finding it with submillimeter accuracy,” he adds. “Most part pickers, especially in the point cloud or 3D CAD world, find the blob and go pick it up. Then they usually drop it and use a 2D camera on a known plane to localize its final position. We’re picking up these parts out of the pile with arguably perfect accuracy every time.”

Mimicking Human Cognitive Recognition
The “magic” is in the Cortex Recognition software, a collection of patented visual recognition algorithms developed by the company’s founder and based on the human cognitive ability to recognize objects.  Recognition Robotics offers an analogy akin to the way a baby learns.

“When we’re born we have nothing in our memory. As we go through life, we unconsciously store all these images in our brains. It begins with our parents’ faces, then our favorite blanket, and so on. Then when we see something, we recognize it.”

“The software resides on a recognition controller, basically an industrial computer,” explains  Recognition Robotics. “Attached to that computer is a single 2D color camera. The camera takes a picture and sends that image back in to the software, where the patented algorithms run. It determines what the object is and where it is in space, in six degrees of freedom (x, y, z offset, as well as the rotation about those axes, Rx, Ry and Rz).”

“All you’re doing is taking a picture,” says  Recognition Robotics. “There’s no calibration, or calibration plate. The only information the user has to enter is the focal length of the camera lens and the distance to the part. There’s no programming with our system. Just store all those recognized images in the baby’s brain.”

Sound too good to be true? Wait, there’s more.

“The human brain also doesn’t need to see the entire item to recognize it,” explains Recognition Robotics. “Our guidance system works exactly the same way. We only need to see roughly 70 to 75 percent of an image to recognize it and still guide a robot to pick it up.”

As demonstrated in this video, this partial visibility recognition makes the system very good at seeing deformable objects, such as chip bags. In this demo, the “baby” was taught the front side and the reverse side of each bag for two different brands of corn chips. It sorts the bags into the correct boxes regardless of how they orient before the camera.

VGR in Your Palm
We first introduced you to Recognition Robotics and its googly-eyed robot two years ago in the article Robotics+Vision at a Glance: The Dos, Don’ts and Applications. Back then, we were talking about Robeye™. The new Cortex Random Picking is an advanced version of Robeye with softwar 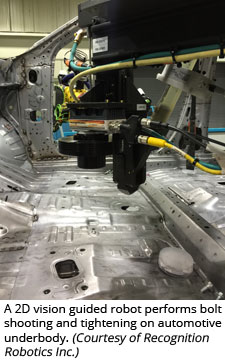 e and algorithm enhancements to allow for the recognition of randomly placed parts.

“Previous to Automate 2015 we had Robeye, which was a three-dimensional guidance system for any robot,” explains Recognition Robotics. “It consisted of a camera, some lights, and the associated cables that all get connected to a large control panel. The control panel then gets connected to the robot controller and that’s how they communicate. So it was a sizable amount of stuff.”

In addition to debuting its random picking system at the Automate show, Recognition Robotics launched RAIO, or Robeye All In One.

“For a long time, we’ve been trying to figure out how to shrink everything, how to get the power of our algorithms into basically just the camera,” explains Cyrek. “That’s RAIO. It’s a smart sensor (CMOS image sensor). Our software is embedded inside of it. Instead of having floor space and electricity consumed by a control panel, we took a shrink ray to everything.” 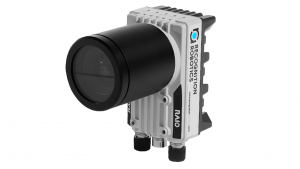 Recognition Robotics says the effect was shock and awe on the show floor. “It’s everything you need to guide a robot in the palm of your hand and it’s deployable within hours,” says Recognition Robotics. “There’s still no need for calibration and it has its own on-board lighting control.”

A 2D vision guided robot performs bolt shooting and tightening on automotive underbody (Courtesy of Recognition Robotics Inc.)“Because we don’t have all the horsepower we need, today it is only used for 2D, 2-1/2D and what we’re calling 4 degrees of freedom guidance, so that’s x, y and z, plus Rz (not full 6 degrees of freedom like
Robeye). In the future, once we refine our algorithm and figure out how to take advantage of the quad core processing power inside of RAIO, we feel we’ll be able to offer six degrees of freedom guidance inside that small package.”

“We still sell Robeye for when you need full six degrees of freedom. But now with RAIO we can compete much more efficiently in the 2D and 2-1/2D market.”

Applications include conveyor picking, palletizing, and depalletizing. In the pictured application, the RAIO system is guiding a screw feeder onto a nut on an automotive underbody. RAIO recognizes the nut and guides the robot-carried bolt installer to the proper location to install and tighten the bolt. Guidance is needed because the build tolerances of the vehicle allow the position of the nut to float greater than the compliance value of the bolt installer.

Recognition Robotics says, since the Automate show, their offices have been flooded with parts for performing prototype feasibility studies. Applications range from picking parts out of totes to assemble valves and components for air bags, to a snack food company that wants to randomly pick bags of product from a bin with a mobile robot and load it into distribution boxes.

> To read the full article